we can’t believe we’re actually typing these words, but:

That’s right, <<<TEN YEARS>>> of heading into battle with that dark-haired King we all grew to love. We’re talking a decade’s worth of raiding, aiding and upgrading. Millions of players, countless Updates and still no end in sight!
This is big, you guys. Real big! So big, in fact, that we can’t help, but get sappy and take you on a stroll down memory lane:

It all started in August 2012, when a small team from Germany first launched an innocent little game called “Royal Revolt!”.
The concept was simple: guide a young King and his army on his quest to repossess his kingdom in a fun twist on the then popular Tower Defense genre. The single player game saw a handful of Updates and became a moderate success, reaching over a million downloads in in just 10 days.

It didn’t take long before talks about a sequel started cropping up. When discussing its potential content, one thing we immediately knew for certain: we had to up the ante in just about every aspect of the game. One sure-fire method to achieve that, was to take it online. Have players build their own defenses and attack those of others. The game was soft-launched in 2013 and finally hit the App Stores internationally in February 2014. In its early stages there were no Alliances, no Blacksmith, not even Hero Items, just a King and his Castle.
Fast forward to 2022, over 8 years and more than 40 Million downloads later, trying to describe the dimensions the game and its mechanics have reached, can truly make your head spin.

Looking back, the thought of still being around with this franchise a decade later is simply surreal to say the least. The ones who made this all possible though, are YOU. The players, our loyal community, who are supporting Royal Revolt since day 1. And for that we’d like to thank you from the bottom of our hearts. 💖

Everyone who’s with us for a while, knows that we’d never show up empty-handed to any birthday party. So let’s jump right into the surprises we have prepared for you for this very special occasion, shall we?

💎 10th Anniversary Gem Sale
Let’s begin with the obvious: We’re running one of our popular Gem Sales.
This time, however, we’ll kick it up a notch, as we extend the usual shindig by 2 days, starting today and conveniently coinciding with our Blacksmith Meltdown Event!

All you gotta do is share the anniversary post on Facebook or retweet it on Twitter from our Social Media Pages, and with a little help from lady luck, you will be picked as a winner!

🎁 Birthday Chest and Free Throwback Skin
Many of you might have noticed already: A Birthday Chest has been paid out to all players today, as well as a free Skin for the Barricade, inspired by the classic Tutorial Barricades from the original “Royal Revolt!”. Vintage!

🗡️ Classic Hero Set (Pro)
Originally introduced during our RR2 7th Anniversary festivities, the Classic Hero Set wasn’t easy to obtain afterward, let alone in its Pro rarity. On Friday, August 26th, however, we’ll give you another chance to finally complete those thirsty Collections of yours. So keep an eye out in game!

🗺️ More Pearl Mines & Magic Fonts in Conquest
Tomorrow’s Conquest Event “A Rocky Road” will provide some extra excitement, as the amount of ⛏️Pearl Mines & ⛲ Magic Fonts all over the map has been increased! You know the drill: First come, first serve.

🎬 A Final Thank You!
And finally, to wrap it all up in a pretty bow 🎀, we have prepared something for y’all: A little video to recall the last 10 years for your viewing pleasure:

And that’s it! Thanks, you guys!
Your Royal Revolt – Team 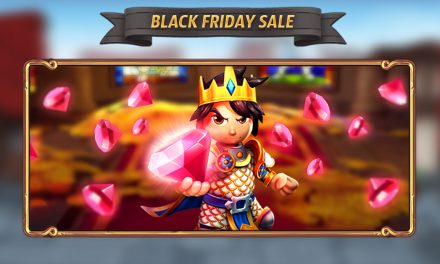 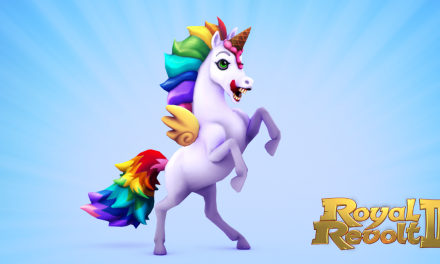 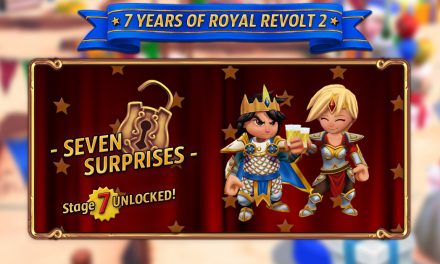